Protecting the ‘Illegal Migrant’: Some Critical Perspectives from India

This post argues that there are inherent contradictions in the international legal argument dubbed as ‘contestations’ and ‘faultlines’, which limit the ability of international law to respond to emergency situations, like the global refugee crisis.

The solution to cross-border migration and impending refugee crises, therefore, needs to be forged by complementing the enforcement of the existing international legal standards with relevant policies at the domestic level. In the absence of the latter, it seems highly improbable that such problems could be addressed.

Borders and refugees: The Indian experience

International law often seems inept at addressing issues of statelessness on account of a differential understanding surrounding sovereignty, nationality, territoriality, jurisdiction and international obligation. This gets all the more complicated when a state demonstrates its unwillingness to safeguard the lives of the people residing within its territory or else refuses to accord protection to people who enter its territory seeking protection for their lives.

India offers an interesting case-study in this regard. It has no uniform policy to secure the protection of refugees and/or illegal migrants within its territory. Its standards of classifying ‘legal’ and ‘illegal’ migrants have been highly subjective. Its territorial borders continue to remain porous with a regular and unaccounted movement of people into its territory. And, its territorial boundaries remain contested against its neighbours, especially China and Pakistan.

How does then India seek to address the problems arising out of porous borders alongside the issue of rising statelessness? By implementing a law that redefines citizenship.

Indian law, as it was framed before, de-linked ‘nationality’ from ‘citizenship’. The Indian Constitution became one of the rare documents which defined an individual’s link to its soil through a separate legislation – The Citizenship Act, 1955. Additionally, the Indian Constitution did not provide the right to identity as a fundamental right, even though the fundamental rights of an individual are concomitant to their constitutional identification. Additionally, scholars have argued that the law on citizenship has more recently been adopting the criteria of jus sanguinis (based on descent), instead of jus soli (based on birth), as was the situation originally.

The Citizenship (Amendment) Act of 2019, redefines the understanding of ‘illegal migrants’ under domestic law. It says that the term does not include any person belonging to Hindu, Sikh, Buddhist, Jain, Parsi or Christian community from Afghanistan, Bangladesh or Pakistan who entered the Indian soil on or before December 31, 2014. It essentially means that people belonging to these categories can apply for citizenship under the domestic law. The Act, as it comes out, marginalizes Muslims and violates the right to non-discrimination and equal treatment under the Indian Constitution (Articles 14 and 15).

The Act challenges the very notions of an individual’s belongingness to a territory. It does so in multiple ways – first, by including some individuals while excluding others from the membership of the nation, disregarding the factor of naturalization; second, by purifying the notion of belongingness through a constructed identity of cultural superiority, pushing other identities (culturally constructed or otherwise) to the margins; third, by politicizing the legal link between the individual and the state thereby taking away the legal protection which individuals receive through statehood; fourth, by de-secularizing the public space of civic life and injecting such religious discourse which marginalizes some religious identifications at the cost of the others; fifth, by securitizing the discourse of belongingness in a manner which de-securitizes some identities while upping the security of others; and finally, by subverting the right to human dignity and freedom at the cost of the constructed ideal of the ‘self’ at the hands of the State.

Indian citizenship and the Rohingya conundrum

The persecution of Rohingyas is  essentially a problem of the history of citizenship in India. It is rooted in the differential classification of Hindu ‘refugees’ and Muslim ‘migrants’ at the hands of domestic authorities. This problem has only exacerbated since the time post-partition anxieties forced people to re-migrate back to India, beginning in 1950s. While Hindu immigrants were readily assimilated as protected migrants, Muslim immigrants had to define their intention to receive any legal protection. The danger of a threat to national security was attached to one but not the other. The CAA, 2019, does nothing else but to formally acknowledge this classification, while validating its religious undertones.

The Supreme Court of India in its order of April 8, 2021 allowed the deportation of Rohingya refugees to Myanmar despite having observed that they might face threats to their life in such an instance. It ruled in favour of deportation through a four pronged approach – first, that the right to movement was essentially linked to the right to residence within the territory; second, agreeing, though passively, that the Union Government’s argument that Rohingyas could be a threat to the national security; third, that the obligation of non-refoulement does not fall upon India as it is not a party to the 1951 Refugee Convention; and fourth, in the most saddening manner, by observing that “we cannot comment upon something happening in another country”, while also acknowledging the recent military coup in Myanmar which further threatens the life of the Rohingyas once they reach Myanmar.

The deconstructed understanding of international law

International law primarily governs how states interact with each other by defining standards of international behaviour. In the case of nationality (or citizenship), it addresses the issues of belongingness, not as isolated events requesting redress, but as arising between States in the form of ‘contested claims’ (Nottebohm, Barcelona Traction and Kulbhushan Jadhav). However, at the same time, the International Convention against Statelessness (1961) as well as relevant provisions of Universal Declaration of Human Rights (1948) and other Human Rights Covenants, talk about ‘nationality’ as a universal value; taking it beyond the purview of the state, or for that matter even inter-state claims.

Arguably, it is understood that in instances where national laws are either inadequate or deficient, international law could inform the practices of the states to protect human rights of the displaced or stateless people. The issue of belongingness, however, remains the exclusive domain of a state. Unless there is an international convention that binds the states to secure the identity of the people within its territory, the chances stand bleak to protect the rights of both undocumented migrants and refugees under the rubric of international law. In all such instances solutions could be forged only with international law and domestic law working together in tandem.

In this case, India could instead have pursued a different route to address the problems of porous borders and the instances of rising statelessness. The solution proposed here could be a combination of the following - a non-promulgation of the CAA; promotion of friendly relations with its neighbours; settlement of border disputes through bilateral agreements; adoption of a policy classifying people as refugees, and extending them protection.

Additionally, in the Rohingya case, the Supreme Court could have allowed the United Nations High Commissioner for Refugees (UNHCR) the position of an interlocutor party, which unfortunately it did not. The participation of UNHCR might have opened up repatriation options, if it was indeed essential, for the Rohingya refugees under a Voluntary Repatriation Agreement (VRA) between the necessary parties.

VRAs are allowed by international law and offer a way in which collaborative efforts could bring both international law and the domestic legal system in tandem. However, the essential requirement for such approach to succeed is that it must be forged through both an active and collective representation from the potential refugee subjects. Any invocation of VRA in the Indian scenario would, therefore, require proper consultation with the Rohingya representative bodies in addition to the UNHCR in order to ensure a safe and dignified repatriation of these refugees.

Siddiqui, N. A. (2021). Protecting the ‘Illegal Migrant’: Some Critical Perspectives from India. Available at: https://www.law.ox.ac.uk/research-subject-groups/centre-criminology/centreborder-criminologies/blog/2021/07/protecting [date]

Diplomatic Ties, Financial Incentives and a Narrowing of International Legal Obligations: A Reading of the UK High Court’s Decision on the ‘Rwanda Policy’ 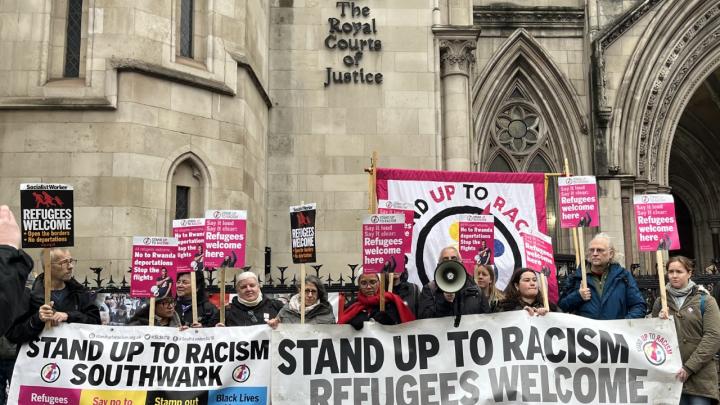