The Wall, Hotspots And Detention at Sea: Those Other Sites of Detention

Post by Dr Marion Vannier. Marion is a lecturer in criminology at the University of Manchester. Her research interests encompass the sociology of punishment, criminal law, and human rights. Her book, Normalising Punishment: the case of life without parole in California will be published by Oxford University Press in 2021. The book draws on a unique database of over 300 letters written by prisoners serving LWOP in California. Marion continues to be interested in topics relating to life imprisonment and the politics of punishment more broadly. Her other research inquiries include migration studies. Marion is a research associate at the University of Oxford, Centre for Criminology, Border Criminologies and The Imprisonment Observatory. This is the first installment of Border Criminologies themed week on 'The other sites of detention', organised my Marion.

On the 9th January 2020 I was invited by Dr Yasmine Bouagga, member of the Conseil National Scientifique de la Recherche (CNRS) and lecturer at the Ecole Normale Superieure of Lyon to attend a panel on immigration detention, which is a topic Mary Bosworth and I have researched comparatively. Yasmine Bouagga’s extensive ethnographic work on immigration detention includes a collaboration with cartoonist Lisa Mandel on a comic book of the Calais refugee camps. In Les Nouvelles de la Jungle de Calais, they report with humour the daily struggles of associations who strive to alleviate the distress of thousands of men, women and children fleeing the war.

The panellists included visiting professor, Amanda Frost of the American University in Washington D.C (USA), Antoine Guerin and Almodys Peyre both researchers at the University of Lyon 3, and Professor Marie-Laure Basilien-Gainche of the University of Lyon 3 as discussant. A report was also presented by the organisation Prison Insider and extracts from the award-winning animated short film Nowhere Line: Voices from Manus Island were screened.

It was a calm and crisp winter evening in Lyon, which felt somewhat at odds amidst the Yellow Vest protests that had roiled the country for months starting in October of 2019. Universities were shut down but the panel had decided to go ahead. In such critical times, embracing opportunities to discuss and voice the harms of the already vulnerable population of asylum seekers is vital, Yasmine Bouagga explained in her introductory note.

In this themed series for Border Criminologies, Amanda Frost, Almodis Peyre and Antoine Guerin share their thoughts on overlooked spaces of confinement and strategies of immigration control. In her post, Amanda Frost discusses how detention has been employed as an illegal mechanism to deter migrants from entering the United States. There is a clear tension, Frost notes, between US federal legislation that provides a right to seek asylum (8 U.S. Code § 1158) and the dramatic increase of migrant detention since 1990. The average daily population of detained migrantsin 2019 was over 50,000 /day (ICE, 2020). The ‘zero sum’ approach deployed against immigration culminated in the Spring of 2018 with the Trump administration family separation policy after walling off Mexico. Under the policy, federal authorities had authorised to separate children and infants from parents or guardians with whom they had entered the US. Parents were prosecuted and detained in federal jails or deported while the children were placed under the supervision of the US Department of Health and Human Services. Frost concludes that detention is strategically used to ‘send out a message’, instil fear and ultimately discourage migrants from seeking refuge in the US, illustrating the limits of legal frames and protections.

In the same vein, France introduced a series of stringent reforms in November 2019 to discourage asylum seekers from even trying to reach the French borders. President Macron’s new measures included a provision that asylum seekers have to wait three months before qualifying for non-urgent health care; the removal of the informal migrant camps set up around Paris and the creation of an annual quota system to grant visas to skilled immigrants looking to enter French borders. “We want to regain control over our immigration policy,” Prime Minister Édouard Philippe said. In an interview for the right-wing magazine, “Valeurs Actuelles,” Macron further explained that the authorities had been lenient in expelling those who had entered France illegally “My goal is to throw out everybody who has no reason to be here,” the president said.

In addition to the range of measures designed to prevent migration, there are a number of sites of detention that have been overlooked. Antoine Guerin, for instance, examines the development and practices of hotspots in the Greek Islands under complex European legal frames. The notion of ‘hotspot’ lacks a clear definition, Guerin notes. According to the European Commission, hotspots refer to places where there is a “specific and disproportionate migratory pressure.” While originally designed to address reception and identification issues, hotspots have been used to intercept refugees and facilitate migrants’ swift returns. Asylum seekers are not just detained ‘within’ borders’; Guerin argues that a new form of detention has been introduced, one that involves being ‘locked out’ of borders.

Almodis Peyre explores yet another under-researched place of detention, that of ships. Under a range of international legal instruments, there is the duty to rescue people at sea. However, French legislation of 1927 provides that captains are authorised to detain illegal migrants found on their ship to ensure the safety of the ship and its passengers. At sea, the rights of migrants are extremely limited. Unlike pirates, who have a right to have a lawyer or an interpreter, refugees discovered onboard do not. By contrast, the powers of captains are wide-ranging and exposed to very limited external scrutiny.

As discussant, Marie-Laure Basilien-Gainche concluded the January session by highlighting four further issues. In French, the term ‘retention’ is used to describe immigration places of confinement, and is distinguished from the notion of ‘detention’ which refers to criminal behaviours and involves criminal procedures. Basilien-Gainche questions whether such disctinction is actually justified and suggests that retention and detention, in practice, overlap without, however ensuring the rights and protections available to ‘traditional’ criminal acts and offenders. The second point raised by the discussant related to the numerous ‘invisible’ places of confinement, either located within state borders (eg police stations), ‘on’ their very edges (e.g hotspots), or situated in ‘real’ international spaces, such as ships. Thirdly, there are places of detention in non-EU states such as Belarus, Ukraine, Morocco, which raise significant concerns in terms of inhumane treatments which nonetheless receive EU state aids. In the last part of her address, Basilien-Gainche discussed the methods (in particular legal frames) employed to legitimate the widespread use of immigration detention, causing a range of fundamental rights violations.

The exceptional research that has developed in Britain and France is unfortunately rarely comparative and remains rather short-sighted. Scholars who write about immigration detention on both sides of the Channel seldom draw on each other’s studies. In presenting an overview of the research being conducted in France on immigration detention issues, this special issue will hopefully spur collaborative and interdisciplinary research. Recent events, including Brexit, Trump’s legacy, the global pandemic, and disasters like the fire in the UNHRC camp on Lesbos, accentuate the urgency of combining intellectual resources, building cross-border networks, and engaging in comparative research projects in order to sharpen our critiques of immigration confinement.

Vannier, M. (2021). The Wall, Hotspots And Detention at Sea: Those Other Sites of Detention. Available at: https://www.law.ox.ac.uk/research-subject-groups/centre-criminology/centreborder-criminologies/blog/2021/03/walls-hotspots-and [date]

The Case of Khlaifia 2011-2021: 10 years of human rights violations in Italian hotspots 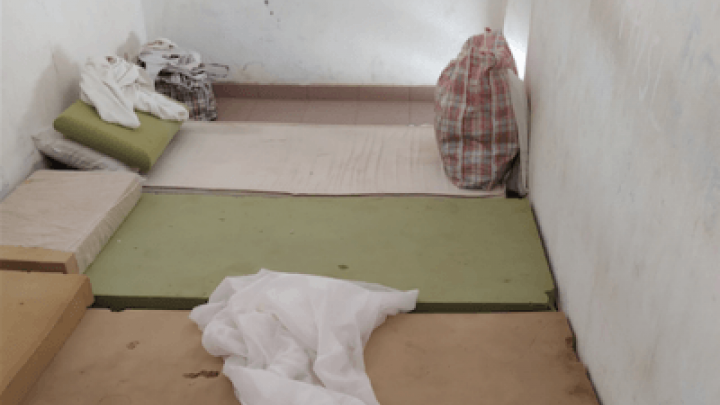 The European Approach to Hotspots in Greek Islands