Beyond Detention as Deterrence

Post by Amanda Frost. Amanda is the Ann Loeb Bronfman Distinguished Professor of Law and Government at American University. Her book You Are Not American: Citizenship Stripping from Dred Scott to the Dreamers was published in January 2021. This is the second installment of Border Criminologies themed week on 'The other sites of detention', organised my Marion Vannier.

Over the four years, the administration of President Donald Trump conducted a grand experiment: If immigration officials treat arriving immigrants badly enough, will they stop coming? Although the Trump administration did not invent the concept of using detention as an immigration deterrent, its officials perfected it. In doing so, U.S. immigration officials confirmed what we already knew: detention for the purpose of deterrence is immoral and likely illegal.  But they also added to our collective knowledge by proving, once and for all, that detention is not an effective deterrent.

The laws governing the process of seeking asylum in the United States, as well as the permissible grounds for detaining asylum seekers, are fairly straightforward. Noncitizens have a legal right to seek asylum in the United States if they claim that they have been subject to persecution in their home countries.  Noncitizens who demonstrate a “credible fear” of such persecution during an initial screening have the right to a full asylum hearing before an immigration judge. If they lose, they can then appeal an adverse decision to the Board of Immigration Appeals and eventually to a U.S. Federal Court. The process of bringing and appealing such a case often takes several years.

Noncitizens who have demonstrated a credible fear of persecution should be released from detention for most of this long process, save for two exceptions: 1) to ensure the removal from the United States when immigration officials believe the individual is a flight risk; or 2) if the noncitizen poses a danger to persons or property.

Despite these limited grounds for detaining noncitizens, U.S. immigration officials have aggressively ramped up detention over the last thirty years. The numbers are startling.  At the start of the 1990s, the United States detained fewer than 100,000 immigrants a year. In 2019—before policy changes in response to Covid reduced the detained population—that number reached 500,000. In 1994, the average daily population of immigrants in detention was below 10,000. In 2019, it exceeded 50,000 people. In the 1990s, the average length of stay in a U.S. immigrant detention center was about 25 days; today it approaches 40 days. Not surprisingly, the costs of such detention have skyrocketed. Today, the United States spends over $3 billion each year to detain and deport immigrants.

As this history demonstrates, immigration detention did not begin with President Trump, nor did his administration pioneer the use of detention as deterrence. The administrations of both President Jimmy Carter and George W. Bush used detention in an effort to deter Haitian immigrants from coming to the United States. During an influx of asylum seekers across the southern border in the summer of 2014, the Obama administration chose to detain mothers and children pending their asylum hearings to deter future waves of immigration.

But President Trump took detention-as-deterrence to an unprecedented level. Within a week of taking office, Trump issued an executive order that eliminated the Obama administration’s immigration enforcement priorities. Under Trump’s order, all undocumented immigrants—regardless of their length of time in the United States, family connections, or lack of criminal history—would be at risk of deportation, significantly enlarging the number of immigrants targeted for detention and removal.

Most notoriously, in the summer of 2018, the Trump administration implemented a “zero tolerance” policy, under which his administration criminally prosecuted all immigrants entering the United States outside of designated ports of entry, including those seeking asylum. The new arrivals were arrested, charged with crimes, and sent to jail, regardless of the strength of their asylum claim. Children cannot accompany their parents in jail, and so an important consequence of that policy was to separate parents seeking asylum from their children.  At times, parents were deported even as their children remained in the United States, with no clear procedures in place to reunite them.

The “zero tolerance” policy had a clear goal: to deter future asylum seekers. When asked to defend the policy, White House Chief of State John Kelly explained “a big name of the game is deterrence.”  Department of Health and Human Services Acting Assistant Secretary Steven Wagner stated, “We expect that the new policy will result in a deterrence effect.” When then-Attorney General Jeff Sessions was asked in an interview if the policy was intended as a deterrent, he responded “yes.”

And yet detention for the purposes of deterring future asylum seekers from coming to the United States is likely illegal.  A federal district court enjoined the Obama administration’s policy of using detention as a deterrent. Although the U.S. Supreme Court has not addressed that question directly, it has previous declared that deterrence cannot justify detention in the civil context.

Even more clearly, the policy is immoral.  World leaders condemned it, and Americans took to the streets in protest. As two experts bluntly put it, “deliberately inflicting mental suffering on children to deter their parents from migrating to the United States” crosses “an ethical redline.”

Like previous administrations, the Trump administration believed that detention would deter future asylum seekers. They were all wrong. In 2019, just a year after the highly-publicized family separation policy and several years into an increase in the rate of detention, U.S. Customs and Border Protection apprehended nearly one million immigrants at the southern border with Mexico—88% higher than apprehensions the year before.  For better or worse, the Trump administration has proven, once and for all, that detention does not deter.

The Trump administration eventually abandoned detention for a different strategy: barring entry altogether. First came the “remain in Mexico” program, which requires asylum seekers to remain outside of the United States while waiting to have their cases to be heard. And then, in the wake of the COVID-19 pandemic, officials adopted a new, likely illegal, policy to turn back nearly all asylum seekers within hours of arrival. Apparently, the Trump administration concluded that the only way to prevent asylum seekers from entering the country is to take away the right to seek asylum altogether.

President Joe Biden has made it clear that he will not be using detention as a means of deterrence.  His administration has already admitted to the United States some of those who had been waiting in the “Remain in Mexico” program, and they will be released under supervision while their asylum cases are pending.  As the number of unaccompanied minors at the border rises, Biden faces tough questions about how to respond.  But he appears to have learned from the Trump administration’s experience: detention is not only costly and inhumane; it is also ineffective.

Frost, A. (2021). Beyond Detention as Deterrence. Available at: https://www.law.ox.ac.uk/research-subject-groups/centre-criminology/centreborder-criminologies/blog/2021/03/beyond-detention [date]

Challenging Border Violence in the Central Mediterranean Sea: An account from Alarm Phone 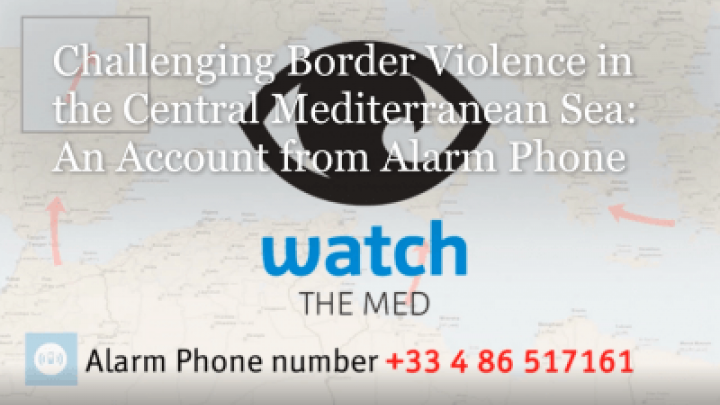