Whenever deportation issues are covered, whether in print or online, chances are the feature will be accompanied by the image of a plane. A passenger jet being readied for departure. A forlorn procession of people and security escorts ascending the aircraft steps. Deportees sitting in rows in a brightly lit cabin. These are all typical images confirming that in different guises the plane serves as one of the most ubiquitous signifiers of deportation. The plane is to this state-sanctioned form of coerced mobility what the overcrowded boat has become to the humanitarian scandal of irregular border crossing: its vehicular avatar.

The plane’s privileged place in the mediascape of deportation is well deserved. Global aviation has become a strategic infrastructure, which underpins the international system of deportation today, particularly if we consider the way expulsion is practised by the states of the global North. In Germany, for instance, Deutsche Welle reports that in 2016 of the overall total of 25,375 deportations carried out, 94% were by air. With their massive advertising campaigns, airlines have done much to portray global aviation in a warm and positive light. They have cast it as a cosmopolitan force of globalization shrinking space and time, and bringing people together. But once we recognize that commercial aviation is the indispensable modality of deportation we need to amend this image. We should note that the very same flight routes that knit places and people together globally and across borders are also used to move people in ways intended to reinscribe those borders. The power of aviation is, in this sense at least, a double-edged sword.

While scholars are well aware that expulsion today relies heavily on airlines, only rarely have they examined aviation as a technology of deportation. Bruno Latour says that if you want to appreciate the difference that a given nonhuman thing makes to the world then try the thought experiment of removing it. See what other humans and nonhumans would have to do were it not present. What if we tried this with deportation: what would the expulsion of people look like if there were no planes? One in four removals from the UK are to India and Pakistan. What form would these long-distance journeys take if there were no airways? We know from history that geography alone has never been an obstacle when powerful state or non-state actors want to forcibly move populations. But we also know that transporting people across oceans and continents against their will by ship or train is an incredibly violent exercise. Air deportation requires a certain exercise of force too, but now it can be concentrated and reorganized around a vastly compressed journey time.

Aviation serves as a force translator: it changes the terms of the problem of coerced mobility on a transnational scale. The image of a plane soaring into the sky, as though free from earthly entanglements, can be misleading. Human flight requires a complex infrastructure of airports, navigation, supplies, regulations, and much else. If states profit from the speed and geographical reach which aviation brings to deportation this does not come effortlessly. For example, states have to strategize over how to manage situations like the transit airport or how to ensure deportation flights have clearance to traverse the air space of other states. Tricky as these tasks may be, they are no doubt more amenable to technocratic governance than the alternative scenario: a deportation journey that proceeds by land or sea, passing through many third countries en route to its ultimate destination.

Aviation has definitely reinvented deportation in ways that have not yet been adequately understood. Yet there is nothing smooth about the interaction of aviation and deportation. There is turbulence. We are not looking at a frictionless machine but a field of antagonism and struggles. For example, in August 2017 it was reported that a Turkish pilot had refused to fly Samir Bigzad whom the UK was attempting to deport to Afghanistan via Istanbul. Campaigners had gathered at Heathrow and encouraged waiting passengers to alert the crew to the injustice of Bigzad’s treatment. Reports from Germany reveal a much wider pattern. In 2017 as many as 222 planned expulsions were thwarted when German pilots, many with Lufthansa, refused to fly people targeted for deportation to dangerous countries like Afghanistan. Again, many of these refusals have been sparked by protestors in airports or even on the tarmac. Air France had reported a wave of such incidents as early as 1998.

These and other forms of resistance have surely caused states to change the way they approach  deportation by air, whether recalibrating the way they sanction the use of force against recalcitrant deportees, or experimenting with the monetary incentivization of expulsion – otherwise known as ‘assisted return’. But they have also led states to create new ‘air bridges’: charter flights which carry no regular passengers, only deportees and migration officials, distance the act of expulsion from the gaze of a travelling public.

Compared with the ship, the airplane has a rather minor place in migration and borders research. I draw attention to aviation for two reasons. First, there is a point about technologies and migration. It makes perfect sense that research should examine very contemporary and dynamic technologies to understand how they are reshaping migration. Hence, the focus of this forum on migrant digitalities is timely and welcome. But we should not overlook the ways in which older technologies shape migration worlds as well. Indeed, sometimes the longevity and familiarity of old technologies lessens their visibility, blending them into the landscape. Aviation is in key respects an old, well-established technology, but a technology of migration nonetheless. As such, it deserves more critical attention than it has so far received.

The second reason to consider aviation and deportation has to do with power. It is this point that I want to develop in the remainder of this comment. Deportation reveals that aviation is shot through with power and resistance. It is animated by struggles, individual and collective, spontaneous and organized, local and sometimes translocal. Moreover, these struggles are in part refracted by the specific properties of aviation systems. Consider the fact that planes (and ships) have captains; buses and trains don’t! Or that planes envelop their passengers in a way that few other vehicle forms can approach. Or that planes depart instantaneously, disappearing into the clouds. These are just a few ways that the norms, forms and atmospheres of aviation shape the power relations of deportation.

What we are seeing with the case of deportation is a form of air power. Different forms of air power are at play in other migration-related contexts: the role air transport has played in shaping labour migration, the capacities which aviation has brought to the conduct of evacuation and the resettlement of refugees, or the use of aerial technologies of drone, plane and satellite for monitoring borders from the air. To speak of air power in this context might at first sound odd. Isn’t air power about military power, whether the capability to dominate the skies or to defend against aerial attack? Yes, in the sense the term has typically been used since its birth, about 100 years or so. But one consequence of this association is that we see bombers, fighter jets, and now armed drones as air force, and civil aviation as more benign – as transport, or, if we are to use today’s parlance, mobility.

What would it mean to think about the governance and the contestation of migration, the making and remaking of borders, and much else in terms of an expanded conception of air power?  I don’t have a quick answer, only a suggestion. A fruitful way to proceed would be for migration research to start a conversation with those lines of inquiry where the sky is being critically rethought within geographies of power. Of special relevance here is the work of geographers, political theorists and philosophers interested in the spatialities of volume and the vertical (Elden, Gregory), air power as police power (Neocleous), affects and atmospheres of the aerial (Adey), the visualities of the satellite and other scopic regimes (Parks), and the historico-political  processes of enclosure that have shaped the skies (Shaw). Amongst the questions this conversation might pursue would be: Who controls the sky? What are the aerial geographies of migration and deportation?  By what historical and political processes are the skies appropriated, enclosed, divided? What role did the rise of airlines, first as state monopolies and national carriers, and increasingly as giant private conglomerates, play in this appropriation of the air? What consequences does this enclosure of the sky have for migration? Are some skies more permeable to autonomous movement than others? In what way does boat migration have air migration as its absent-presence? Why is autonomous border crossing by small planes such a rare and almost exotic phenomenon?

In the Metamorphoses Ovid depicts Daedalus as being exiled and trapped on Crete. ‘He [Minos] may thwart our escape by land or sea’, Daedalus declares, ‘but the sky is surely open to us: we will go that way: Minos rules everything but he does not rule the heavens’. It would seem the sky is no longer open, at least not in the way Daedalus understood. A better account of the air power of migration is urgently needed to understand how this happened and with what consequences. 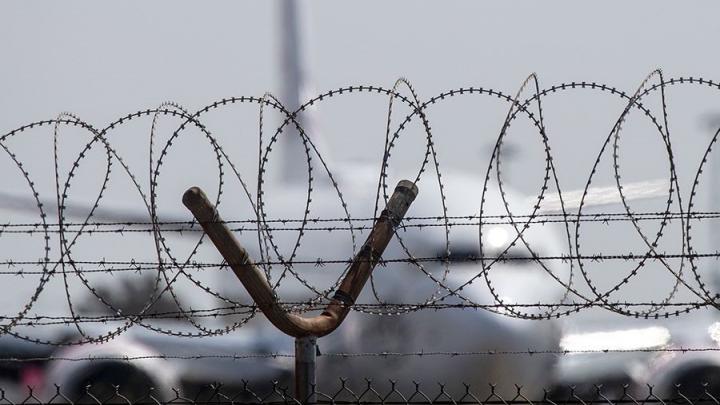