Exploiting a Tragedy: The Securitization of EU Borders in the Wake of Lampedusa

On the 3rd of October 2013, Europe awoke to the news that a boat carrying hundreds of migrants had capsized off the coast of Lampedusa, a small Italian island off the coast of Sicily. Labelled the ‘Lampedusa tragedy,’ politicians and bureaucrats were quick to declare their sorrow, as it emerged that over 360 migrants had lost their lives in the incident. Yet, far from being an isolated accident, the Lampedusa tragedy is only one particularly grave example of the price paid by migrants on a daily basis as they try to cross European borders. The Parliamentary Assembly for the Council of Europe (PACE), for example, has highlighted that at least 1,200 migrants died attempting to cross the Mediterranean in 2012. Similarly, in the face of the Arab Spring in 2011, the United Nations High Commissioner for Refugees estimated that over 1,500 people had died or had gone missing at sea attempting to reach Europe during the first six months of that year alone.

Placing the Lampedusa tragedy in context, it becomes clear that it is symptomatic of a much wider problem in which the European Union (EU) has encouraged tighter border control at all costs. Referred to in the academic literature ‘securitization’ or ‘Fortress Europe’ this search for security has increased the risks that migrants face as they attempt to reach Europe, and contributed to the high numbers of migrant deaths at sea. For example, evidence suggests that, migrants use more hazardous routes getting to Europe, to avoid Frontex – a European agency tasked with policing the external borders of the Union, whose mission is defined in security terms. Likewise, traffickers, who wish to reduce the fuel costs associated with the return journey, may take advantage of Frontex’s search and rescue capacity by using cheap materials to build their boats and requiring migrants to sink the boat they are travelling in. Even the Chief of Frontex has recognised that the presence of the agency in international waters has in some ways been to the advantage of traffickers and to the detriment of migrant safety.

Beyond Frontex, there is further evidence that the EU’s border securitization has contributed to the perils that migrants encounter in open waters. Faced with carrier sanctions, which impose fines on private companies that carry persons who do not hold the necessary documentation to enter the EU, passing ships show reluctance to help when migrant boats find themselves in trouble. A report by PACE highlights an example of one such incident in 2011, where a boat which left Libya with 72 migrants on board returned, having failed to reach the European mainland, with only 9 survivors. In that instance, two commercial fishing vessels refused to come to the aid of the migrants, and one military ship simply did not acknowledge its obvious distress signals. European migration policy has thus drafted in private actors to police its borders, cutting off avenues of assistance for migrants who find themselves in danger at sea.

Given the deliberate securitization of EU borders what then explains the reaction of the EU to the Lampedusa tragedy? In response to the incident, almost all of the region’s institutions have called for increased use of security measures and tougher border control, citing migrant safety as the justification. The European Council, for example, has stressed the importance of the new European border surveillance system, EUROSUR, in protecting migrants, calling for member states to provide more support to Frontex in its activities in the Mediterranean – a position supported by the European Commission. Cecilia Malmstrom, the European Commissioner for Home Affairs, has stated the need for a greater use of Frontex, in its search and rescue capacity, arguing that the implementation of the new surveillance system will help member states identify and track vessels at sea. The European Parliament has endorsed the Commission’s proposal for greater use of Frontex in search and rescue operations, and has called for increased funding for the agency.

Having shown how the securitization of EU borders has endangered the lives of migrants at sea, it seems particularly perverse that the EU institutions should use Lampedusa in order to justify tightening border control. The suggestion that increasing the use and funding of Frontex, even in a search and rescue capacity, would better protect migrants runs counter to academic research in this area. The benefits of EUROSUR in terms of migrant safety are also questionable. Although it has been suggested that the surveillance system will help Member States track and identify vessels at sea, it is not clear that this will save any lives. Think once again about the Libyan boat, which received no help from passing ships, highlighted above. In that case, the Italian Maritime Rescue Coordination Centre had identified the location of the vessel, and several national authorities were aware that the boat was in trouble. The problem was not, in other words, a lack of information or surveillance. Instead, there was a lack of willingness to help – from both national authorities and private actors – in light of the EU’s general approach to migration. As Phillip Amaral, from the Jesuit Refugee Service, has argued therefore, the real aim of these proposals is not migrant safety, but a further tightening of border control.

In its recourse to security, the EU has failed to address adequately the real source of tension in these issues – the Dublin Regulations. Enacted in 2003, the Dublin II Regulation allocates responsibility amongst Member States for processing asylum applications. It does so on the crude basis that the Member State through which the migrant irregularly entered the EU should be responsible for dealing with any subsequent asylum claim.  In this way, it encourages Member States to police their own borders, or face the ‘burden’ of not doing so. The European Council on Refugees and Exiles (ECRE) has summarised the problems of the Dublin system. In doing so, it argues that the regime works on an assumption that every EU Member State can adequately provide protection for asylum seekers, despite evidence and court rulings to the contrary. It involves an arbitrary means of allocating responsibility, which fails to take adequate account of the links individuals may have to a particular state which would make settling in Europe considerably less difficult. The Regulations also leave asylum seekers ‘in limbo,’ and often in detention, while they wait to be allocated. Most notably, it makes southern and eastern European Member States responsible for a disproportionate number of asylum claims. Northern European states have therefore failed to take responsibility for a fair share of asylum applications, leaving less affluent southern states to ensure that refugees in Europe receive protection. The island of Lampedusa itself provides a compelling example of this problem. In the wake of the Arab Spring in 2011, 50,000 people arrived on the small island, which has a resident population of 2,400. Aware that they will have to deal with the asylum applications of those who arrive on their shores, southern states are reluctant to let boats dock, even when the migrants on board are in danger.

The Dublin Regulations have been recast, and Dublin III entered into force this year. Initial proposals for an early warning system that would have encouraged ‘burden’ sharing in times of crisis, were, however, watered down by the Council – and the final draft very much leaves responsibility for any crisis with each Member State. In addition, the safeguards introduced in the Dublin III Regulations do not go far enough to address the problems of the Dublin system – which is inherently and fundamentally flawed. In response to Lampedusa, a number of the EU institutions, most notably the Parliament and the Commission, have commented on the need to alleviate some of the pressure faced by southern and eastern European states. In a Resolution, the Parliament has explicitly said that the country of disembarkation should not necessarily be the country that has to deal with the asylum application. However, besides ‘encouraging’ Member States to adhere to the principle of solidarity, and share the responsibility for asylum seekers, none of the EU institutions have proposed any fundamental changed to the Dublin system or any binding obligations.

The unequal responsibilities of northern and southern Member States under the Dublin system lie at the heart of tragedies such as Lampedusa. Responsibility for asylum seekers is left to those states least able to cope with such demands. Unable or unwilling to come to agreement on such issues, the Member States of Europe have only one common goal: the reinforcement of external borders. As such, they look to ever increasing security and border control as a solution upon which they can agree. Unfortunately, it is not a solution. Member States hope that strict border controls will deter asylum seekers. In doing so, they assume that such people have options, which is often simply not the case. Migrants continue to come to Europe, and will continue to do so even in the face of dangerous border policies. If the EU does not face this fact, and look to safe routes of entry and fairer allocation of responsibility for asylum seekers, we can expect another tragedy soon enough.

The ‘Lampedusa Tragedy’ was just that – a tragedy. However, in branding it as such, Member States and the EU institutions have tried to shirk from the role their own policies had in bringing it about, attempting to keep the true cost of their ‘Fortress Europe’ approach to migration below the surface. Far from acting as a wake up call to the EU, Lampedusa has, quite cynically, been used as a catalyst for further securitization. There have been no discreet U-turns behind the scenes. Instead, lip service has been paid to the protection of migrants, while the EU pushes on with the same hazardous polices as before. Guild and Carrera have suggested that ‘solidarity’ in the EU collides with the boundaries of the principle of national sovereignty on issues of migration, encouraging national resistance. This is undoubtedly true, and is evidenced by the on-going tensions between northern and southern European states with regard to the Dublin regulations. The one thing, however, that unsurprisingly gets pan-European consensus is the need to tighten external borders the need for greater security at all costs. As Europeans, living in the so-called birthplace of human rights, we must surely ask how many more people must pay for out security with their lives?

For another account on Lampedusa, see Alessandro Spena's piece, The Injustice of Criminalizing Irregular Migration.

Rooney C (2013) Exploiting a Tragedy: The Securitization of EU Borders in the Wake of Lampedusa. Available at: http://bordercriminologies.law.ox.ac.uk/exploiting-a-tragedy (Accessed [date]).

The Humanitarian Border, In Place 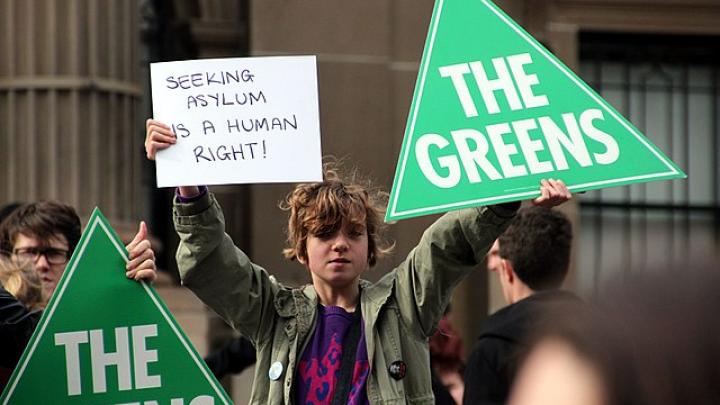